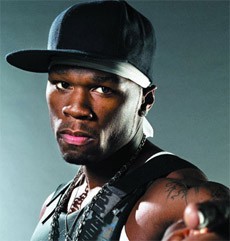 50 Cent is a famous American Rapper, his full and real name is Curtis James Jackson III , He was born on 6th of July 1975 in South Jamaica, Queens.
50 Cent became famous after he released his best albums entitled Get Rich or Die Tryin' in the year 2003 and The Massacre in the year 2005. Both albums combined sold over 22 million copies world-wide.

During the 80s the crack epidemic flourished, 50 cents was at the age of twelve and he began drug dealing. Later on he stopped drug dealing to started a rap-music career. 50 Cent was discovered by rapper Eminem and signed to Interscope Records. 50Cents was shot nine times during the year 2000.

Two years after his shots he released his album entitled, Guess Who's Back?

Help us improve this page:   Correct or update the 50 Cent page