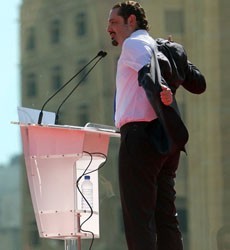 This is a video of PM Saad Hariri doing a small striptease on the 13th of march 2011, during the 6th anniversary of the 14th of march movement.

Saad el Hariri went on stage and began stripping while addressing the Lebanese guys and girls in an unprecedented spectacle of show-off, supposedly to show he is from the people. The organizers suggested this would have a similar effect to what Obama had previously done, but given it was imported and was over-acted, the result led to nationwide mockeries and sarcastic comments. People could not help but also compare it to the 1981 movie Evita, where the Juan Perone character did something similar.

Soon after, hundreds of videos and caricatures mushroomed all over the net, and the next day the newspapers focused less on what was said in his speech and more on his strip tease!

To note that this came only a few weeks after the Saudi newspapers described him as not fit to be a politician but rather a model or singer...