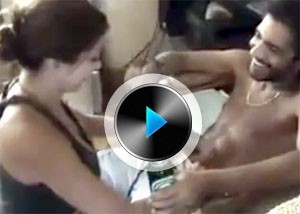 A video uploaded on YouTube in April 2011, featuring Razan Moghrabi and her boyfriend Naji hanging around with some friends, has recently gotten a lot of media attention. Though it is not really a sex video, it is being perceived by the Tabloids as some sort of scandal due to its ‘libertine’ nature. The emancipated Razan Moughrabi seemed to be joking around, discussing the pretend plot and scenario of an erotic movie that would star her next to her boyfriend Naji. As she is describing the scene to her friends (…she walks into the Royal Harem, where a handsome eunuch catches her attention…only to later see him bathing in a pool and realizes he is a ‘complete’ man after all…) another friend tapes it for fun. Wanting to entertain her friends, Razan simulates some indecent acts in a pretend instructional video, discusses details about her boyfriend, and even gets closer to Naji, before the video is cut off.

Although it was initially rumored that Razan had intentionally leaked the video herself for publicity, it became clear she was the victim of her naivety.

Razan had a nervous breakdown and entered the hospital ,following the spread of the video over the internet.

Updates: On April 10 2011, Razan returned to Beirut from Egypt, to clarify this matter to the public opinion. Tony Khalifeh had canceled a section on his show Lel Nasher (on Al Jadeed TV) that were to expose the hidden aspects of the video and the overall incident. This came after Razan wished for him to postpone it until she could be present herself and explain the circumstances surrounding the video. It was reported that Razan's laptop (that contained the video) had been stolen more than a year and a half prior to the leakage of the tape, and that she was expecting the video footage to turn out at any moment.

It seems there could be more to the short video that spread on the internet, and that this was just a teaser.

To note that Razan now fears for her life (not just her career), as many fatwas were issued against her because of the tape on YouTube. In Egypt, many officials have also attempted to issue warrants banning her from ever entering Egypt again.

Later on rumors spread suggesting that Dolly Shaheen was behind the video leakage. Both Dolly and Razan rejected that idea though. Elie Bassil was also accused to be in some way related to this.