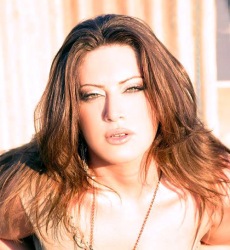 Syrian singer Nana admitted that she was in an provocative film, a movie which recently spread by Bluetooth and through the Internet.

Nana (Najwa Ka3ka3)was not ashamed of herself and only sent out a piece of advice to women: to never trust men!

Nana singer admitted to have seen just part of the film only because she could not tolerate the pain it caused her, due to the graphic content of the video and invasion of her privacy. (Being in it is one thing, but watching it is another it seems)

Nana claimed that her boyfriend Khalil Karam was with her in the video, and that she was not fully conscious when it happened. He even tried to blackmail her afterwards through numerous letters, seeking financial remunerations in return for the original tape. But when she refused, the film came out to the public.

The video was shot by a common friend, who was a girl.


Updates: Nana reappeared 3 years later on TV with Tony Khalifeh in Lel Nasher, with a legal document that states she is completely innocent. Nana explained that the woman in the film is not even her. She added the two women that appeared in the video are Iraqi and Kurdish, and while one of them was arrested the other is still on the run away. Khalil was also arrested. Nana refused to confront Khalil's brother who tried to call the show to explain his side of the story, and asked Tony to end the call. Nana admitted she had helped them all financially (out of love for Khalil), but now realizes they didn't deserve her help.

It is hard to know what the real story is, especially since anything is possible in Lebanon; It is no secret that money teamed with influence can make anything possible. Nana's story was a bit confusing since she first admitted to be in the video. She now also claims she did not even watch the movie, although she mentioned that the woman in the film has a tattoo/ mole on her body that she does not have...Nana made sure to repeat at numerous occasions that Khalil was sick and not a normal person. This is the same person she says she was deeply in love with...the contradictions continue..

To note that Khalil had previously explained on the same show, that this was all Nana's idea to get the attention of the media, and make her more popular, but that it backfired.

Why is she back now talking about the same story? Nana wants to clear her name for the sake of her son, which she hopes one day will grow up to respect her....To be continued.

So who do you suppose is telling the truth?

More Updates:
The Lebanese Public Prosecutor identified and interrogated the woman who filmed the movie for Nana on July the 18th. In her testimony she explained Nana asked her to shoot the film for $200 earlier that day after she met her for the first time in a salon in Beirut. She actually works as a hairdresser, and manicurist.
She went on to say that the purpose of the film as explained to her by Nana at the time, is that the artist wanted to control her boyfriend and prevent him from leaving her. Khalil supposedly was feeling ill after the shoot and suffered from severe cramps in the stomach and from a state of continuous vomiting.

The woman also asked for protection from the Lebanese prosecutor as she received death threats from Nana.