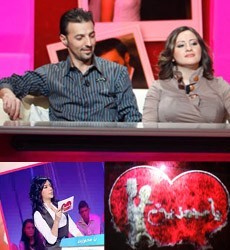 Ya Mjawazin is the Lebanese adaptation of the French TV game show Les Zamours.

Ya Mjawazin is hosted by Patricia Dagher on Al Jadeed TV, and is one of many Lebanese TV programs to be inspired by the French version.

Although not as liberal as the original French show, Ya Mjawazin attempts to break some taboos as it is not rare to come across a veiled woman answering a question about her sex life such as the number of times she does it with her husband, or where was the most unusual place they did it, or how long it lasted. The TV program is however limited to married couples, and questions are generally adapted to a more conservative audience. ( more exactly, the answers are the ones that are generally more conservative)

The presenter lacks the charisma and humor of Tex.
The pace is slower, typical trait in Lebanese adaptations of such shows. The budget is clearly lower, the boards on which the answers are written on are replaced with regular paper! The directing (Rawad Daou) is poor in comparison to the original version. The is no Finale whereby the couple with the highest points must play against the clock an additional game but rather in the Lebanese version the couple automatically wins the game after beating the other two. There is only on set, unlike the French version where a small corner with bar chairs is used to record the answers of the candidates (separated from their partners).

Help us improve this page:   Correct or update the Ya Mjawazin TV Show page