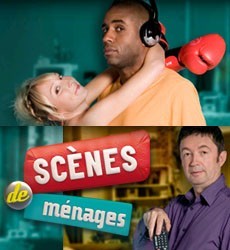 Scènes de Ménages was first produced in Novemner 2009, under the direction of Francis Duqueand and is in the same spirit as 'Un gars une fille' (Lovebites) with small sketches featuring couples in domestic situations. 2 seasons have already been produced, and a 3rd season is on the way.