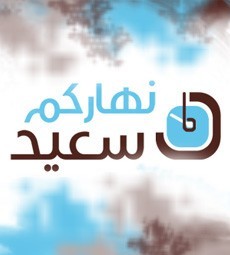 Nharkom Said was launched by LBC after the success of Alam Al Sabah in the early nineties.

Nharkom Said daily show raises local social, political, and economic issues as well as those related to the Arab World. The political section of it features interviews with ministers, MPs and other political analysts or economists.

The social section of Nharkom Said deals with pop culture, music, art exhibitions, events, etc. In its early beginings, there used to be a game section called Akbar aw Asghar during which callers had to guess the nature of a hidden item placed in a box. This section was subject to ridicule, and later on canceled. This section has been presented by hosts such as May Matta, Hiyam Abou Chedid, Dalida Baroud, and Mireille Mazaraani.


The political part of Nharkom Said was previously presented by May Chediac, Shaza Omar, Elie Nakouzi, and continues today with Dolly Ghanem and other famous names. It includes several interviews live on the air to analyze the current political reality and keep up with all the regional developments and their implications, and sometimes features messages from correspondents deployed in all countries of the world.

Help us improve this page:   Correct or update the Nharkom Said page