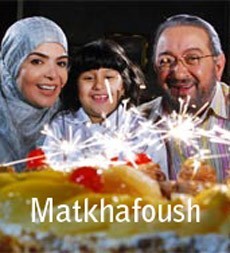 Matkhafoush is a Television series which started airing in the 2009 Month of Ramadan.

Nour El Sherif plays the role of a Television presenter and owner of television station and newspaper.

Nour Al Sherif presents a political program in which he talks about the social problems facing our society.

Nour acts opposite actress Hana Shiha who plays the role of his secretary.

Help us improve this page:   Correct or update the Matkhafoush page