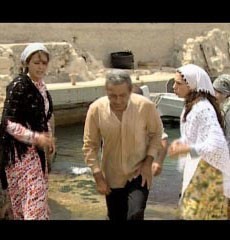 Maleh Ya Bahr is one of the first Lebanese TV series aired by OTV.

Maleh Ya Bahr is written by Marwan Al Abd, directed by Lilianne Al Boustany and produced by Rou'a Production.

Maleh Ya Bahr was mostly shot by the Mediterranean like the name suggests. Between good and evil, between money and power, between tyranny and freedom, under unfair social disparity, many impossible love stories evolve. The pride of a poor woman breaks the influence of feudalism just like the sea rocks break the waves no matter how great they are...

Help us improve this page:   Correct or update the Maleh Ya Bahr page