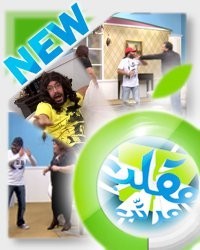 Ma2lab Mratab was conceived by Mickeal Abou Kassm, who played a Khaliji talk show host in its first season, and a crazy lunatic director (straight from TF1 France) in its second season, striving to fool celebrities and get them 'punked' on television.

The unintentional ingenuity of Maklab Mratab resides in its ability to expose the lack of professionalism and the exceeding degree of arrogance of the phony guests. This was however not the actual purpose of the show, but certainly differentiated it from other similar gag shows and gave it more depth & value.

The viewers got to see the artists' authentic 'real' personalities, and the dramatic change in their persona once they thought the filming of the supposed talk show 'Hakeh Mas2oul' had begun and how they returned to their real-selves during the cuts & breaks. Most of them failed the test, and most probably lost a few fans along the way.

The guests (that were mostly from the D-list!) exposed their stupid shallowness and almost all of them at one point as they were being 'punked' threatened to leave the set flaunting they were doing the station a favor by attending, while in reality the TV was the one obviously doing them the BIG favor! Most of them also could not take any kind of criticism, whether related to their art or otherwise...

Help us improve this page:   Correct or update the Ma2lab Mrattab page