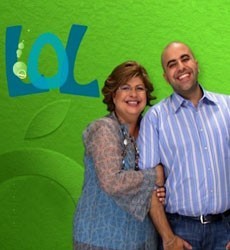 LOL is a comedy show on OTV.

Directed by Shady Hanna, LOL offered a totally new concept that made OTV for a while the most watched Lebanese television on Sunday nights. Apart from the two regular hosts, other comedians, celebrities and guests were invited to also tell some of their favorite jokes. Abu Abed jokes and dirty sex jokes were regularly on the menu, making the program a very controversial issue. With LOL, Otv was able to break the psychological barrier which was imposed by the political conflicts in the country back then, whereby opposition and government supporters alike all sat in front of their TV sets to laugh their hearts out.

This breakthrough for OTV irritated those that did not approve of the station's political views, who responded by inflating the controversial aspect of the show and encouraging the orthodox censorship to quiet what they perceived as public indecency.
However their strategy backfired as this only brought more publicity to LOL, and the show became even more popular.

Lol was such a huge success, not to mention quite profitable (given its low budget), that many other TV stations attempted in vain to reproduce it, such as Murr Television - MTV Lebanon. With her profile, her hilarious and sweet laugh, not to mention her joke telling skills, Arze had given LOL something very special, something that could not easily be reproduced. LOL retaliated by making fun of their imitators, displaying funny banners on their set that read "We do not have another branch".

As months passed by, the show became repetitive and lost its popularity. To maintain its earlier spark, Lol resorted to gradually increasing its level of naughtiness. This only irritated further the bored viewers who were already flipping between channels and zapping around. Others could also no longer tolerate Hisham's behavior, something they overlooked a bit at the start; He would often show weird signs of instability, to the extend some suggested he could be drugged or was high before getting on the set perhaps to decrease his nervosity or shyness.

In late 2011, the show got a new start; A new set was installed and LOL was given it's very own mascot (a cat named Otitos ). A DJ that plays dance music was also added to the cast.

Help us improve this page:   Correct or update the LOL OTV page