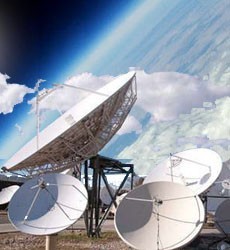 The Libyan officials have managed to block most of the Lebanese satellite news channels, preventing them from exposing the atrocities of Muammar al-Gaddafi regime.
The sustained interference not only jammed NBN, al Jadeed, al Manar TV & OTV, but also hit regional news channels and stations such as the infamous al Jazeera.


An organized and sophisticated blocking attack had prevented such channels from being viewed properly, sometimes even completely paralyzing them. This came after the Libyan regime also blocked its internet connection, and prevented its people from accessing other means of communication with the external world.

Hizbollah described in a statement the incident as a “flagrant assault” on Lebanese media organizations, and added it was necessary for officials to take the necessary measures to protect media corporations and prevent further jamming assaults.

The National Audiovisual Council (NAC) accused Libya of attempting to impose a media blackout to prevent the world seeing the atrocities its security forces are accused of perpetrating. It qualified this recent incident as piracy and a violation of freedom of the media and Arab viewers’ right to knowledge.