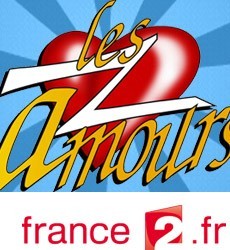 Les Zamours or Les Z'amours is a cult French TV game show hosted by Tex on France 2 since February 20th 1995.

The concept of Les Z'amours is similar to a previous French show called Les Mariés de l'A2, which was hosted on Antenne 2 by Patrice Laffont then by Georges Beller.

Up until 16 January 2010, Les Zamours was co-hosted with the voice of Pierre Galibert from backstage along with Tex who first became the presenter of the show in October 2000. Before that, Jean-Luc Reichmann was the presenter between 1995 - June 2000, and in Summer 2000 Patrice Laffont was the host.

Every day, Tex receives 3 pairs of lovers of all ages and from all regions of France (sometimes from neighboring European countries like Belgium) on his daily show (except sundays). Whether married or not, whether they know each other for 6 months or 20 years, they are here to test how much they really know each other.

Tex is initially left alone with the men and asks them 3 questions related to their wives. Once the responses recorded, the women return to the plateau and are subject to the same questions. 5 Points are granted to matching answers. It is then the turn of the women to stay alone with Tex and answer 3 more questions about their spouses. When the men return on stage, they are required to answer the same questions. An extra bonus question worth 25 points at the end of the 6 questions may still shuffle the whole ranking! The couple with ​​the highest score then plays the finale, answering questions against the clock on their mate to win the final prize (usually a trip abroad).
Speed​​, spontaneity, and complicity is what the couples need to have to win the fun journey of Les Z'Amours.

The TV game show proved to be so popular, it was transformed in 2002 into a board game by Druon. A few special versions were also created including Les P'tits Z'amours: Between 2006 and 2009, on Wednesdays and during school holidays, three families each with two children aged 7 to 13 would compete in the game.

A Lebanese adaptation called Ya Mjawazin was also created in 2011.