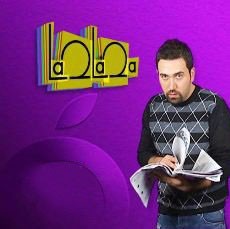 La2la2a is a Comedy Talk Show presented by Tarek Soueid on OTV.

La2la2a receives celebrities and guests from the music and artistic scene mostly from Lebanon.

La2la2a is divided into different parts; Discussion & questions, 2il w 2al, La2la2it telephone, etc...
In one of the sections, May Sahab plays the role of a blond pretentious host called 3awatef.

There is also a fortunetelling section where the celebrities get to have their coffe cups read by an expert.

La2la2a is directed by Eddy Abdel Nour (directors of the show also Shady Hanna, Rachid Seif), and written by Tarek himself.

La2la2a has so far been shot for two consecutive seasons and usually airs on Thursday at 8:30 PM on Orange Television - OTV / Reruns are on Friday at 3:45 AM & 1 PM / Rerun of episodes season 1 Saturday at 1 PM

Help us improve this page:   Correct or update the La2la2a page