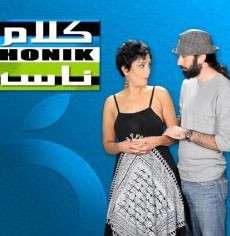 Kalem Honik Nes is a satirical comedy show that airs on OTV.

Kalem Honik Nes is a satirical comedy show co-presented by Ziad Sahab and his wife Isabelle Noun Sahab. It runs on Orange Television - OTV, and includes funny sketches, political parody with guests and other humorous parts.

The producers aimed for a somewhat innovative and fun concept. It is a spoof of Kalem el Nes, a famous political talk show hosted by Marcel Ghanem on Lebanese Broadcasting Corporation - LBC. However, the show sometimes falls into the same aspects it is trying to ridicule!


Kalem Honik Nes is one of many shows on OTV which are hosted by presenters who do not really fit the standard profile of what a presenter is supposed to be like, either because of their poor hosting skills, their irritating personality or simply lack of experience and professionalism.

Kalem Honik Nes is written by Edmond Haddad & Izabelle Sahhab with Hicham Haddad & Shadi Hanna. The later is also the director, and sometimes also appears in small section of the programme.

An unexpected incident happened on the set once in late 2010, while shooting an episode with Yogi Master and Macrobiotic expert Mariam Nour. After a small misunderstanding, the guest cursed the two presenters which she called immature ignorant kids and took off in the middle of the show. Because Kalem Honik Nes is not a live show, the editors saved this episode by featuring a staged conflict between the presenters and their producer/director. Despite their attempts, the final outcome wasn't brilliant mainly because of the overacting and redundancy. Still it was a smart solution to the problem.

Help us improve this page:   Correct or update the Kalem Honik Nes page