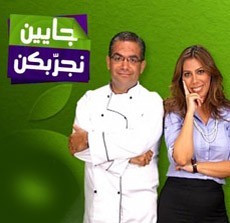 In Season One the competing guests were regular families, but in Season 2 the show chose celebrities to do the cooking and compete for the title of best host and cook.

A jury, composed of a Chef Imad Arawi along with an etiquette specialist, Sonya Sabbah in Season 1 and Mathia Barakat Gebrane in Season 2, is responsible for putting the grades for each family or group competing (unlike the French version where the guests themselves rate the protagonists).

Jeyin Njarrebkoun is directed by Samar Azar. The voice over that comments during the show is that of Imad Feghali. The Executive Producer is Hala Bou Saab, the Editor Norayr Saraian, and the Audio Post Production is done by Joe Nasr.

Help us improve this page:   Correct or update the Jeyin Njarebkon page