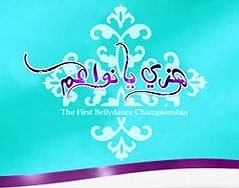 Hizzi Ya Nawa3em is a TV talent show for Oriental belly dance.

Hizzi Ya Nawa3em, also written Hezzi Ya Nawaem or Hizzy Ya Nawa3em, was first produced in 2007 for Lebanese Broadcasting Corporation - LBC, based on a concept created by Amelia Zidane and IMagic. It was The First World Belly Dance Championship in the region, and helped revive this lost forgotten art.
The Jury on the show was composed of Simon Asmar, Najwa Fouad, Zaza Hassan, and Nadra Assaf were an added value.

Candidates were casted from all over the world, and were brought in to compete in what was a semi-reality TV show.

The winner of Hizzi Ya Nawaem Season 1 was belly dancer Estelle also known as Estelle Zaghloul.

The winner of Hizzi Ya Nawaem Season 2 in 2008, was Magalie, see World Bellydance Joke.


Hizzi Ya Nawa3em Season 3 in on the way, and is expected to be produced in 2011 for Murr Television - MTV Lebanon.

Help us improve this page:   Correct or update the Hizzi Ya Nawa3em page