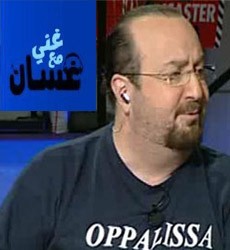 In 2009, Ghassan Rahbani came up with a new concept for a TV talent show called Ghani Ma3 Ghassan (sing with Gassan), which he originally hosted on Orange Television - OTV. In 2011, the show moved to Al Jadeed TV, with the primes presented by Charlotte Semaan.

Ghani Ma3 Ghassan is completely a Lebanese production from start to finish, starting with its original concept. Unlike other similar shows including Star Academy , X Factor, Super Star etc., the candidates can call in from the comfort of their homes and sing through the phone during the casting part. Those deemed good enough are chosen by Ghassan to go through a preliminary voting phase, before making it to the finals and face the public for the first time in song primes.

The general laid back mood set by Ghassan on the show quickly skyrocketed the ratings. He was noted for his constant teasing and joking with his music partner the guitarist Alain Makdessi. Along the same spirit as his known activism through song, Ghassan would also show taped segments about traffic & road problems, wrong social behavior, etc...

The concept in the second season on New TV changed slightly, to become closer to similar big budget TV talent shows and was shot in Studio Vision.

Some of the previous winners include Samantha Sayegh, Radwan Sadek, Sami Shamsi.

CONTROVERSY:
At the end of the final prime of season 3, a big clash occurred between the organizers of Ghani Ma3 Ghassan and the family of one of the candidates Asaad Jaafar, who lost and came in second position. His family attacked Ghassan and his father Elias Rahbani, which led to fighting and swearing. A military force later intervened to help them to safety, after Asaad's father threatened Ghassan Rahbani personally telling him he would not go home that night.

Help us improve this page:   Correct or update the Ghani Ma3 Ghassan page