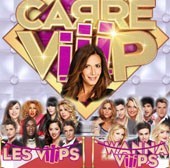 Carré Viiip is the televised reunion (or confrontation) of two generations of reality TV celebrities:

- A generation of emblematic figures from previous French TV reality shows, referred to as ViiiPs. They are back to prove they deserve to stay in the spotlight. The 8 candidates are:


- On the other hand, a new generation of candidates who dream of becoming famous. The new reality TV candidates who no longer wish to remain anonymous are called Wanna ViiiPs and are also 8:

For several weeks, the 16 candidates live in one place in the SQUARE ViiiP as housemates.

The set is thought to have the largest space ever built for a reality TV show (700 m2) with comfort and luxury worthy of the grandest palaces with SPA, Jacuzzi, Sauna, Massage, Terrace, ....

Every day, the candidates are tested on their ability to stay on top, as they are coached by Mickael Vendetta.

A ViiiPometer, a ViiiPitude and a ViiiPBook counter will help rank the popularity of these Viiip and Wanna-Viiip's. Every week on Monday, the ones that get the most buzz, are the most popular, benefit from greater coverage in headlines, or have the most fans on their personal page, are granted immunization. Others will face eviction and leave the Carré Viiip. They go to the Confessional to nominate two people of the opposite clan that they want to face the public vote with.

This race for popularity includes more interaction with the public and outside world, something new in previous TV reality shows.

Help us improve this page:   Correct or update the CARRE ViiiP page