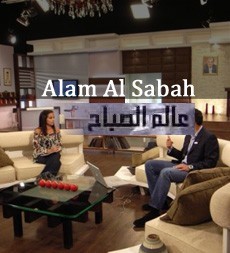 Alam Al Sabah is one of the first morning show type programs which aired for the first time in the mid nineties when future television was a terrestrial station.

After the success of Alam Al Sabah in Lebanon, the idea was replicated on many television stations. The Lebanese Broadcasting Corporation - LBC was the second television to create a program as such and they named it, Nharkom Said.

Many other TV stations in Lebanon and the region followed with similar names such as Al Jadid TV and Orange Television - OTV with Yawm Jdid.

Alam Al Sabah features a number of different segments of entertainment with focus on the Lebanese and Arab housewives.

Alam Al Sabah was presented throughout the span of years by a number of personalities which grew from the program to become celebrities in the Middle East.

In 2010, Lebanese model Wissam Hanna joined the cast of the program.

Help us improve this page:   Correct or update the Alam Al Sabah page