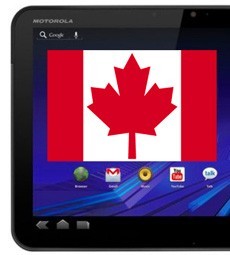 
The official release date of Motorola Xoom in Canada is still uncertain. On the other hand it will release on 20th of February 2011 in US.

The official telecommunication provider of Motorola Xoom in Canada will most likely be Bell, Rogers or Telus. Non of the major providers in Canada have released any information about the Xoom Tablet. In the United States, Verizon is the only provider of this Tablet with 3G and 4G connection.

The Motorola Xoom would probably be launched first in Best Buy Canada in Toronto, before it moves to other cities such as Montreal. Canada will officially receive the Morotola Xoom sometimes in March 2011. Motorola Xoom can be purchased in Canada through Bell, BestBuy and Futureshop.

Motorola Xoom is releasing with a 1080p HD video playback with 2MB front-facing camera and a 5MB rear-facing camera.

Help us improve this page:   Correct or update the Motorola Xoom Canada page