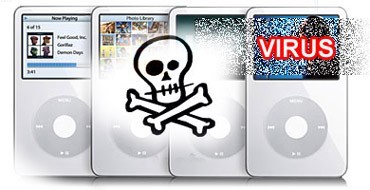 Nothing is safe anymore; even iPods can be hacked and are at risk of receiving a virus.

Apple apologized from owners of iPods video users who got their mp3 devices infected by a Windows based virus.

Microsoft spokesperson noted that no operating system is immune against malicious software of viruses.

The iPod virus which was first discovered around the end of 2006 was named RavMonE.exe
As a general virus the RavMonE.exe was rated a low risk virus.

A lot of fingers were pointing the blame at Microsoft.

The RavMonE.exe virus was found on video iPods which were purchased after the 12th of Septemper 2006.

People who owned and operated iPod nano, iPod shuffles were not affected.

People who owned the iPod video but used Mac OS X operating system were also not affected by the virus.


The only visible effect which the virus causes is to lower your computer security settings are if you run McAfee as your virus protection software, then it will be able to easily detect the change in your security settings and will warn you about it .

Microsoft Corp announced that the virus does not alter of affect Windows vulnerability in general.

McAfee announced immediately that a new version of its Stinger software to remove the virus, which it labels W32/RJump.worm. The worm, which converts itself to a Windows portable executable file to create a system backdoor, was discovered June 20, according to a statement from the anti-virus company.

The virus is easily-disabled with anti-virus software and the company said it has seen less than 25 reports of the virus. But that didn't stop Apple from taking the chance to attack Microsoft about their vulnerable systems.

Apple also assured its customers who own video iPods that the company shall be shipping the iPod Video players free of the virus.


Apple encouraged all iPod users running a Windows operating system to attach the video iPod to their Windows PC and run an anti virus application to detect any resident or future virus.

In case the virus was found, users can then use iTunes version 7 to restore the iPod to its original state.
Apple also encouraged users to download trial versions of few anti-virus applications, including McAfee and Microsoft Live OneCare.

Help us improve this page:   Correct or update the iPod Virus page