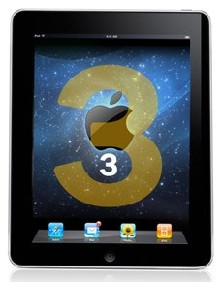 There are many speculations on when the new iPad 3 will be released into the market. The second generation of i-Pad which released during the month of February 2011, did not impress the public very much. The iPad 2 came with very basic upgrades from the iPad 1. In fact, it almost felt as if the second generation iPad was just a simple upgrade to some hardware features which should have existed even with the first generation of the tablet. The anticipated retina display which people waited for, was not implemented and the rear camera quality was less than 1MP. All this suggests that a third model known as the iPad 3 will follow shortly.

The launching of the iPad 3 has not been officially announced by Apple yet, however rumors have already started flying about a possible launch during the month of September 2011.

The competition is underway between the Apple table, the Motorola Xoom and the Samsung Tab.

Both Motorola and Samsung have twice the memory (1 MB Ram). The iPad 2 has less than 1 MP in photo quality, while the Motorola Xoom has 5 Mega Pixels of rear camera and the Samsung Tab has an 8 Mega Pixels (The best in the market so far). The camera image quality, speed and even peripheral device attachments, of other tables are better than the iPad 2, this ultimately suggests that Apple must be preparing for a major breakthrough in order to keep its title as a leading name in the tablet market (and other markets of course).

If we follow the iPad refresh rate, we would easily assume the date of March 2012 (Month 3 of the year 2012) to be the official release date of the iPad 3.

The late earth-quack and tsunami which hit Japan, has forced many of the Apple factories to shutdown, suggesting that the iPad 3 launch date might get pushed further into 2012.

The real decision of when the iPad 3 will be launched is yet to come from Apple itself. Normally, Apple studies the consumer market and tries to come up with the best time and approach to insure a successful launch.

Apple also studies prices, tablet purchase rates, of its own and of the competition, before making any possible launch of a product.

In a competitive market of hundreds of tablets coming up every few months, Apple has to act fast, they need to develop a powerful tablet with many new features. We will be providing a special report about the expected, confirmed and rumored iPad 3 Specs. What is down the pipe in this ever growing computer tablet industry, is yet to be revealed.

Help us improve this page:   Correct or update the iPad 3 release date page