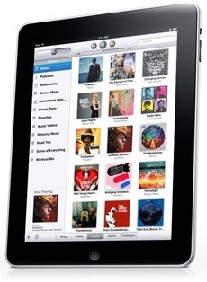 Apple has revealed that it will start selling its latest magical technological instrument known as the iPAD.

The Apple iPad is a 10 inch flat thin LED-backlit screen, IPS display which is a much bigger version of the iPhone or the iPod-Touch and a thinner version of a netbook.

The iPad is a new generation Tablets which serve as your companion on the go. You can use the iPad more like the iPhone, to read and send Emails and Browse the Web with a better and bigger resolution.

The iPad can be used as a game console since it will run all the iPhone Apps including Games at a better resolution.

The iPad can play your Music files as well as your Video files.

The iPad is designed to operate in both portrait and landscape positions.

With a remarkable wide viewing angle of 178°, you can see your photos and share them with your friends. The colors are vivid with excellent quality and great contrast.

Help us improve this page:   Correct or update the iPad page