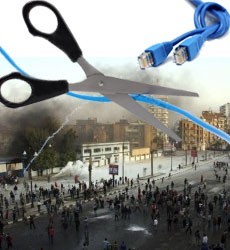 Internet in Egypt down

The Internet and telecommunication services in Egypt have been cut off by Hosni Mubarak regime to disrupt new anticipated anti-government protests.

Facebook, Twitter, and other websites that had helped drive the latest protests in Egypt were down by Thursday 28 2011 in the evening. Those sites were disrupted, along with cell phone text messaging and BlackBerry Messenger services, before the whole internet services were cut off. Phone lines were also down; Vodafone Egypt later confirmed that officials had asked them to cut off all cellular phone services in entire areas of Egypt.


The President has toughened his crackdown, whereby security forces arrested in Cairo more than 10 Brotherhood leaders and former Members of Parliament.Some prominent activists such as Ayman Nour were also hurt in the clashes.

It is believed however that Egypt's fragmented opposition has finally come together, and have organize today (Friday 28) one of the largest manifestations to this date. A few days earlier, presidential candidate and Nobel Peace laureate Mohamed ElBaradei returned to Egypt to join the battle, backed by the Muslim Brotherhood (biggest opposition group). Friday prayers and mosque gatherings have also become a strategic meeting point, attracting millions of protesters demanding the expulsion of Mubarak.

Help us improve this page:   Correct or update the Internet in Egypt down page