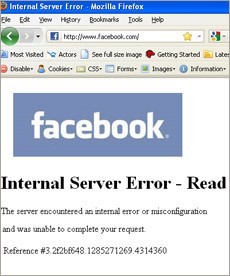 Facebook is considered today as one of the leading social networking websites in the world.

On April 2010, the site experienced some brief interruption of the service due to some network problems.

On the 23rd of Sept 2010, around the afternoon time, the site started experiencing more network problems.

Facebook was inaccessible for most of the time for over 3 hours. All services stopped working.

The initial message on the front page was showing Read Error, then later the message changed to :

It is worth mentioning that day before that, Facebook users were having issues with the LIKE button functionality and with the general site performance.

The problem was a global one for sure, as our experts in the cities of Toronto, Beirut and Mumbai reported similar issues.

On the same day, the founder of facebook announced his idea of extending the services of facebook to cover mobile services.

Help us improve this page:   Correct or update the Facebook Network Problems page