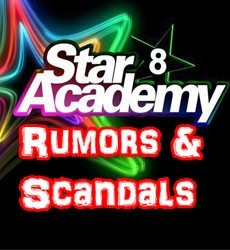 Rumors and Scandals in Star Academy 8

According to Michel Hayek , big scandals and shocking incidents are expected to occur on the TV show Star Academy 2011 Lebanon.

Since the program has only just begun, it is still too early to know for sure if the Hayek Michel 2011 Predictions have come true.

However, we will be keeping an eye on any peculiar incident that will blow up at any moment.

To note that in the previous seasons, many controversial issues were brought up in the media; Some previous contestants and students openly accused the program's producers of forcing them to adopt unethical practices in order to secure a place on the show. Some were allegedly taken advantage of and were subjected to a 'special' test to determine their ability to cope with the atmosphere of the Academy.

Other issues involving a video footage of two female candidates french kissing on the set also made it to the internet and tabloids.

What will it be this year? Let's wait and see what happens...to be continued.


Fight between Karima and Sarah: Catfight in Star Academy

Help us improve this page:   Correct or update the Rumors and Scandals in Star Academy 8 page