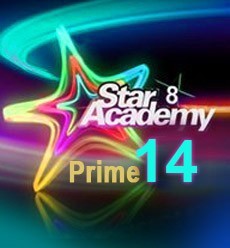 The fourteenth prime of star academy 8 took place on Friday the 1st of July 2011.

The Nominees of prime 14 were: Lian Bazlamit, Gilbert Simon and Mohammed Daqdouq.

The guests of this prime were Egyptian singer Sherine Abdel Wahab who came to the stage accompanied with Umaima and Nesma and they sang a nice song. The other Guest star Fadi Andraos who sang nice songs with the nominees of that prime.

As for the final results, the audience saved Gilbert and brought him back to the Academy.

Both Daqdouq and Bazlamit left the Academy by the end of Prime 14.

Help us improve this page:   Correct or update the Prime 14 Star Academy 8 page