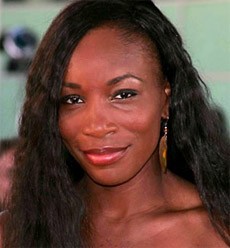 Venus Ebony Starr Williams (born June 17, 1980) is a former World No. 1 American tennis player who, as of July 4, 2009, is ranked World No. 3. She has won a Wimbledon singles title in two of the past three years and is reigning Wimbledon and Australian Open doubles champion. She is the elder sister of Serena Williams, currently ranked No. 2. She holds the record for the fastest serve struck by a woman in a main draw event.

Help us improve this page:   Correct or update the Venus Williams page