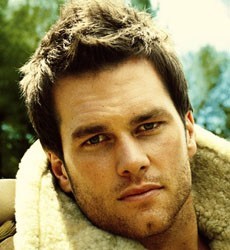 Tom Brady is an American football quarterback for the New England Patriots of the National Football League (NFL).

Tom Brady's full name is Thomas Edward Patrick Brady, and he was born on the 3rd of August 1977.

Tom Brady also models, and has appeared in advertisements for Stretson Original. He has also posed for Esquire and Kalvin Klein.

Help us improve this page:   Correct or update the Tom Brady page