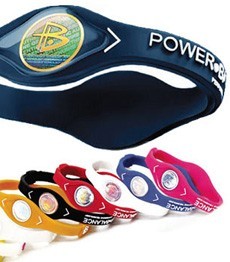 The Power Balance Bracelet is a wristband that supposedly provides better balance, strength and flexibility by working with the wearer's "natural energy field". It was however recently exposed as a scam.


A lot of popular actors, singers and other celebrities are also frequently seen wearing the said power bracelets. Because many like to follow the trend in celebrity fashion, the Power Balance Bracelet has gained popularity everywhere in the world. Robert De Niro, Kate Middleton, Madonna, David Beckham, Leonardo Dicaprio, P. Diddy, Cristiano Ronaldo, and Gerard Butler have been spotted wearing them, among many others.

Worn on the wrist, the Power Balance is a silicone band that bears a special metallic hologram with a so-called Mylar technology. It was created in Australia by Tom O'Dowd, initially to help surfers enhance their stability on the waves. In the first prototypes, the hologram used to be placed in a small pocket-sized rectangular plastic cover, that the surfers could wear on them. Sometimes they were stuck directly onto the surfing boards. The power metal was later commercialized to the wider public in it current shape on the wrist bands.

According to the creator, as soon as the Mylar hologram comes into contact with the electrical field of the wearer's body, its frequency works with your body's electrical field to give a feeling of wellness, and improve one's balance, strength and flexibility. Mylar technology supposedly restores the body's frequency to somewhere near the 7.83 hertz required.

The Power Balance bracelet that claims to improve athletic performance used to sell for around $60 a peice, but has since decreased in price sale to around 20-40$ depending on country.


The Power Balance bracelet has no proof of effectiveness, and the Company was forced to admit that no Science backs up its claims. In 2010, the wristband was exposed as a sham by the consumer watchdog. The Australian Competition and Consumer Commission (ACCC) ordered Power Balance Australia to refund all customers who feel they were misled by the supposed benefits of Power Balance bands. Retailers in Australia that continue to sell the products with misleading advertising or packaging would be open to action from the ACCC.

A BBC Wales investigation also found no difference between the Power Balance and generic bands.

Help us improve this page:   Correct or update the Power Balance Bracelet page