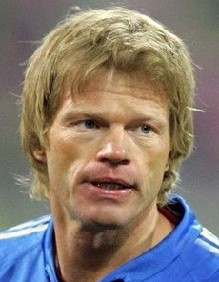 Oliver Kahn is a former football goalkeeper from Germany.

Oliver Kahn started his sports career at the Karlsruher, then he moved to Bayern Munich.

Oliver Kahn is considered as one of the most successful German players in history.

In the year 2001, Oliver Kahn won both the UEFA Champions League and the Intercontinental Cup.

Help us improve this page:   Correct or update the Oliver Kahn page