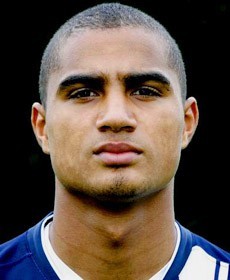 Kevin-Prince Boateng was born on the 6th of March 1987 to a German mother and a Ghanaian father. His birthday coincides with Ghanas Independence Day! Often referred to as the ‘The Ghetto Kid’, Kevin-Prince Boateng grew up in the poor Wedding district of Berlin.

Kevin-Prince started his career with the youth club Reinickendorfer Fuchse, and then signed for Hertha BSC. Boateng is mostly a central midfielder in the German team Portsmouth, and recently also played for the Ghana Lucky Stars, in the Ghanaian national team at the FIFA World Cup 2010.

Portsmouths Kevin-Prince Boateng gave Ghana its first goal from open play in the tournament, after just five minutes at the Royal Bafokeng stadium!
The sexy Kevin-Prince has a bad boy image, and is often criticized for being too immature and rebellious. He was even named ‘public enemy no.1 in Germany, when his tackle in a game caused Chelsea’s Michael Ballack to be ruled out of the World Cup 2010. Kevin’s trademark is his tattooed body, with more than 13 designs covering both his arms, his chest and his neck.

Kevin-Prince Boateng is married to his long term girlfriend, Jennifer.

Football runs in the Boateng Family:
Kevin Prince Boateng’s grandfather on his mothers side is none other than Helmut Rahn, the scorer of the winning West German goal in the 1954 World Cup Final. His younger brother Jerome Boateng is also a soccer player in Germany. His teammate from the Ghanaian national team is also called Derek Boateng.

Help us improve this page:   Correct or update the Kevin Prince Boateng page