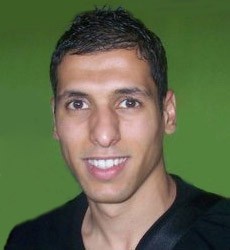 Karim Matmour is a French-Algerian football player, mostly a forward or an attacking midfielder.

Karim Matmour was born on 25 June 1985 in Strasbourg France. He joined at the age of five his first football club.

Karim is part of the Algerian national team, and plays for German Bundesliga Club Borussia Monchengladbach.

Help us improve this page:   Correct or update the Karim Matmour page