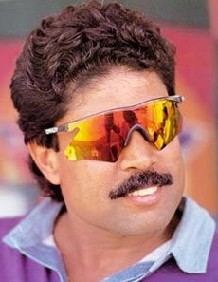 Better known as Kapil Dev, is a former Indian cricketer regarded as one of the greatest all-rounders of all time.

He was captain when India won the world cup in 1983.

Kapil Dev was named by Wisden as the Indian Cricketer of the Century in 2002.

Kapil Dev had a rather prosaic stint as India's national cricket coach for 10 months between October 1999 and August 2000.

Help us improve this page:   Correct or update the Kapil Dev page