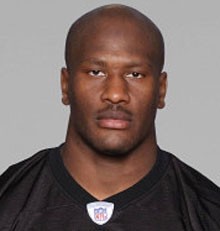 James Harrison Junior is a famous American football linebacker for the Pittsburgh Steelers of the NFL - National Football League. In the year 2002, James Harrison became an undrafted free agent after he contracted by the Steelers.

Harrison attended Coventry High School. where he was the first African-Americans athlete to play football.

He started his sports career by playing football at Kent State college.

In the year 2008 during the month of march, James Harrison was arrested and charged with simple assault and criminal mischief due to a domestic quarrel with his girlfriend.

A few weeks later, the charges against him were dropped after he completed anger management counseling.

Help us improve this page:   Correct or update the James Harrison page