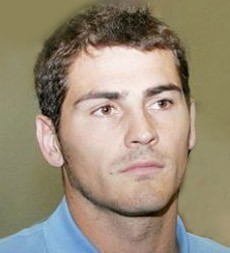 Iker Casillas is a Spanish football player in Real Madrid and the goalkeeper of the national soccer team.

Iker Casillas Fernandez was born on May the 20th of 1981, in Madrid. After extensively playing in juvenile teams and for the Real Madrid's official junior squad starting in the 1090-1991 season, Iker was finally noticed for his goal keeping skills and debuted in the senior side of the 1998-99 season (replacing Bodo Illgner). In 2000, Casillas was the youngest goalkeeper to ever play in a Champions League final; Real Madrid beat Valencia C.F 3-0.

Cesar Sanchez took over the goalkeeping position until he got injured in 2002 Champions League Final. Casillas was naturally the best substitute and lead the 2-1 win over Bayer Leverkusen. He became the number one goalkeeper for Real Madrid ever since! He is actually in a life-time contract with the club until 2017.

Amusing incident: In 2010 soon after Spain won the World Cup, Telecinco (Spanish channel) sent its star sideline reporter Sara Carbonero to interview the national team’s goalkeeper and captain, Iker Casillas. He first describes how happy he is, thanks his parents, his brother, etc... and then sheds into tears before unexpectedly leaning over and French kissing the reporter on TV! Sara Carbonero happened to be also his girlfriend.

Help us improve this page:   Correct or update the Iker Casillas page