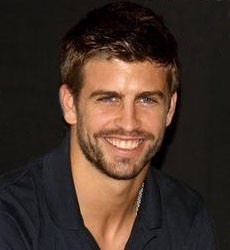 Gerard Piqué is a Spanish footballer, currently playing as a central defender for FC Barcelona.

Gerard is member of le Barça club, and part of the national team team la Roja.

Because of his close love relationship to Shakira, he is lately dubbed Shakiro.

Gerard Piqué is gradually becoming a fashion icon, with his beau gosse image; He is the new ambassador of Time for Force watches (succeeding Cristiano Ronaldo) and the brand H.E. by Mango.

Gerard Pique was born on 2nd February 1987 in Barcelona, Catalonia.

Help us improve this page:   Correct or update the Gerard Pique page