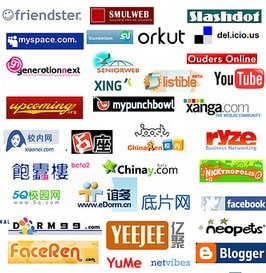 The Best Social Networking Websites in the world

A social networking website is an online community that lets you meet your friends and their friends. It all started by you setting up a profile for yourself where you can search for your friends, share photos, journals and interests with your growing network of mutual friends!

Facebook is another top nitch social network website which was founded by , Facebook started out strictly for college students. In just few month facebook became a cultural phenomenon, all the media started talking about this emerging website and in less than 1 year, it gained so much fame that it soon became second in userbase only to MySpace.
facebook network consists of hundreds of unique school networks, business networks and country networks.

Orkut is another famous networking website developed by Google. Orkut is mostly popular in Brazil and India, However it is still struggling to make it to the top in countries like the United States or canada. To register with Orkut you must use your existing Gmail account, hence your messages and friend requests will be sent to your G-mail account.

Other than MySpace, Facebook and Orkut, familar names pop out to our minds including the newly emerging Bebo and the first starters in social networking Friendster and hi5 which date back to 2002.

Other social networking websites include PerfSpot, Yahoo! 360, Zorpia and Netlog.

Some of the social networking websites are more focused on professional individuals such as the famous LinkedIn and PhDoctors.com

Help us improve this page:   Correct or update the The Best Social Networking Websites in the world page