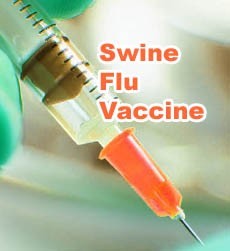 Currently there is no official vaccine for the Swine Influenza Flu virus.

Baxter International Inc. drug makes announced on the 25th of April 2009 that it will work with the guidance of the WHO ( World Health Organization) to develop the first vaccine for Swine Virus. The new swine flu vaccine will help stop the outbreak of a deadly swine flu around the world.

Baxter spokesman said that the company patented technology allows it to develop vaccines in half the time it usually takes.

The new swine vaccine is expected to be in the market in about 13 weeks instead of 26 weeks.

At the same time Centers for Disease Control and Prevention around the world say that the drugs Tamiflu and Relenza which are usually used for general flu treatment proved effective in some cases.

The Relenza Drug and Tamiflu Drug have to be taken at a very early stage of infection for the effect to take place and for the flu to be kicked out of your system.

Help us improve this page:   Correct or update the Swine Flu Vaccine page