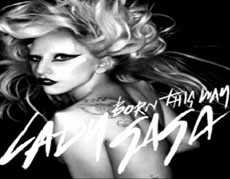 Lady Gaga offends the Lebanese and rips off Madonna

After ripping off Madonna’s persona, Ace of Base’s songs, and Bjork's eccentricity, Lady Gaga now resorts to offending the Lebanese and Arabs in her latest song entitled 'Born This Way'.

Gaga's new song which strives to be the new version of Go West (Pet Shop Boys) with its Gay friendly lyrics, is also ripped straight from Madonna's 1989 hit, "Express Yourself."!

The queen of Pop actually noticed the striking similarities between their two songs . First, her brother Christopher Ciccone went on record saying, "All I can say is 'What the f**k!' when asked to comment on Lady Gaga's new song. "It sounds just like 'Express Yourself' ... I can't believe it to tell you the truth." Madonna's YouTube page also posted "wouldn't you know it, a live performance of "Express Yourself.", referring to Gaga's performance of the song at the latest Grammy Awards 2011.

In 'Born This Way', Gaga apparently wants the Lebanese and the Arabs (which she calls Orient, not sure that’s a nationality or ethnicity deuh!She could also be referring to Asians) not to feel so bad about themselves, and accept that God created them that way. By wanting to embrace the myriad of sexual orientations and races, the song becomes actually very racist and degrading! So in a way it beats the original purpose of the song...We understand her intentions are good and this is a feel good song, but her messiness leaves ample room for misapprehension and confusing.

"DON’T BE A DRAG, JUST BE A QUEEN
WHETHER YOU’RE BROKE OR EVERGREEN
YOU’RE BLACK, WHITE, BEIGE, CHOLA DESCENT
YOU’RE LEBANESE, YOU’RE ORIENT
WHETHER LIFE’S DISABILITIES
LEFT YOU OUTCAST, BULLIED, OR TEASED
REJOICE AND LOVE YOURSELF TODAY
‘CAUSE BABY YOU WERE BORN THIS WAY"


Thank you Gaga for the support, thanks to you they will now no longer feel bad because they are Lebanese and 'Orients', after all like you said it’s not their choice, they were born like this lol! Last time we checked they did not have 3 arms, a hunchback, nor an inferiority complex... Actually quite the opposite! Their pride is out of control, some would even go as far as saying insulting;) Lady Gaga has obviously not met any Lebanese and has no clue what she is singing about.

Basically Gaga used "Lebanese" and "Orient" instead of Lesbian and Sexual Orientation...and because of this now everyone is using Lebanese as a substitute for Lesbian! (Refer to Lesbanese)

To note that it's actually not the first time Gaga has borrowed from pop staples of the past; "Alejandro" from her album "The Fame Monster," is actually a TOTAL rip-off of Ace of Base's 1994 hit song "Don't Turn Around."

But wait there is more! The album cover for the pop star’s highly anticipated Born This Way is a blatant, albeit black and white, copy of the cover for Kylie Minogue’s 2007 release 2 Hearts!


Honestly, we do not get all the buzz 'The Gaga' is getting, she is completely unoriginal. We won't be surprised if her other "NEW" songs also turn out to be rip-offs, but we really hope she would employ a good lyricist as soon as possible to help her come up with better texts;) What we still don't understand however, is why no one has sued her yet for copyright infringement...To be continued.

Help us improve this page:   Correct or update the Lady Gaga offends the Lebanese and rips off Madonna page