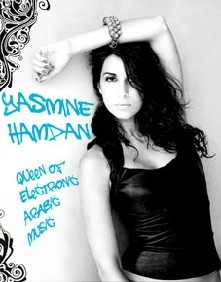 For the lovers of electronic music, we give you the Queen of Arabic Electronica Yasmine Hamdan. The pioneer of best electronic music in the Arab World is our guest for today in this small interview straight from Paris!

Yasmine (YAS-Arabology) was for a long time part of Beirut’s vibrant underground alternative electro-pop music scene. With Zeidd Hamdan in SoapKills, the duo created some of the most avant-garde trip-hop pieces to ever come out of the Middle East. Their legend was further established after they had released the psychedelic trash-Goth music video masterpiece ‘Lost’ (shortly followed by ‘Violence’). The song captured the soul of the mysterious Orient along with its melancholic nature, and placed it in a contemporary grunge package. Their tracks gradually made it around the world, and were often used in movie soundtracks, as background music for documentaries and even in TV programs and reports, in addition to being sampled by the trendiest European pubs and lounges that needed an exotic touch. Exotic, Yasmine is. But don’t you dare describe her work as exotic World Music if you wish to live and see another day!

Yasmine later fine-tuned her style in Arabology, a collaboration with Mirwais Ahmadzai under the group name YAS (See YAS Mirwais Yasmine). Arabology was the first international Electro project to place the Arabic language at the centre of pop culture (Or so it was marketed anyway). One of the dance tracks on it, Get It Right, even managed to give the world a fun lesson on how to count in Arabic numbers! Wahad, tnein, tleteh, arb3a ;)

Yasmine is a very beautiful woman, but that is not the only thing that makes her sexy. Her witty lyrics are often very sensual and provocative...she even sang in French 'Les Preservatifs Sont Trop Chers', which translates into Condoms Are Too Expensive! Or how about her 'There is an Italian in my dress', or the part where she tells her lover she needs a break from sex because she is tired and urges him to make her breakfast instead? Honestly how can one not appreciate such a free spirited genius!?

We had the pleasure of interviewing the Queen of Arabic Electronica herself and we would now like to share with you our little talk.

Hello Yasmine, and thank you for doing this interview.

Your album Arabology with Mirwais is very impressive! We however felt it was a bit under promoted in the Arab World. Or maybe it’s because we loved it too much we wanted more. Either way, was that a weakness in the marketing strategy from your part, or was that intended?

Thank you. Well, marketing strategy is the record label's job or the manager, not really mine. I did think that the promotion was not enough aggressive, I am still gathering the right people around me. I live in Paris and travel a lot; I unfortunately don't spend enough time in Beirut nor Arab countries and can't keep the update.

You have so far released 2 music videos for tracks on this great album. Will there be others, or is that it?

Not for the moment. We did 3 clips, 2 for the album, and a clip for a cover track, Stayin Alive, that was used for an add all over France. The clip is quite funny, you should check it.

Yeah of course we know it; it’s one of the most interesting versions of the original Bee Gees track that we have listened to so far. We also really loved the clip, and that creepy creature was very funny! Captivating stuff. Anyway, we know you are currently also working as a music consultant for movies etc... Does this take time away from your other activities like creating new songs, performing in concerts etc… How do you cope with the two?

I consider myself working all the time, even when I'm resting :)
It is all connected.

Your album was received with such good reviews, are you worried that you might not be able to overdo yourself in the next album?

I don't think about that really. My goal is to do another project that excites me, I think mostly about my pleasure and desires now, this is the healthy way to go. So I’m again into research.

Fair enough. What are your upcoming projects, and where will we see you next? Is YAS just a onetime experiment or will your next album also be with Mirwais?

Not with Mirwais, but I am into many exciting projects and collaborations.

We really love you here at Fanoos, and we hope you will keep doing more of what you have already done! Any last words you would like to add before we end this?

Thank you guys you're great, keep it up!