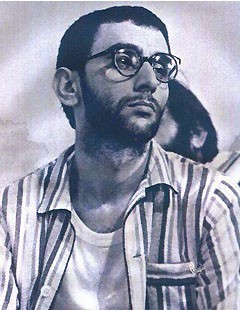 Ziad El Rahbani is a controversial figure in all terms, politically, musically and even poetically. Ziad has been gathering both fans and critics ever since he was young. Both groups defend their ideas, beliefs and tastes, accusing the other side of going too far with or against ziad. All those ideas only indicate how important is Ziad El Rahbani as a Lebanese and Arabic figure.

Ziad Rahbani was born on the 1st of January 1956 in Antelias, Lebanon. Ziad is the son of the famous Lebanese singer Fairouz and composer Assi Rahbani,
Ziad has composed many songs for Fairuz and other well known singers.

Many of his musicals satirized the political situation in Lebanon during and after the civil war; some people even believe that he could forsee the war coming from far when he was young. Some of his other musicals addressed more philosophical as well as political questions. Ziad would always play the main role in all his plays.

On the first of January 1956, Nuhad Haddad (A.K.A. Fairuz) gave birth to her first-born boy. And she, along with her husband Assi Rahbany, decided to call him Ziad...
Both parents were talented and famous, they never thought that their son would become the controversial yet great musician, poet and play writer he turned out to be.

Little Ziad was elected the best looking child in a contest he participated in... He still thinks the photos aren't his, since he could never imagine that the child in the photo could grow up to look like he does nowadays...

At the age of 6, he used to stop his homework, in order to judge if a tune that Assi, his father, had written was beautiful or not and to see what was missing in it...
"Assi didn't always choose the version that I, the 6 year old child, preferred. But it was his way in making me feel that I had an opinion of my own" Says Ziad.
Later on, Assi heard Ziad repeating a musical tune over and over, he then asked him if he had heard it anywhere else, and Ziad's answer was negative, he only heard it in his head... It was then that Assi began realizing his son's musical talents...

The first well known work of Ziad was a divan called (Sadiqi Allah) which he worked on between the years 1967 and 1968. Ziad was almost 13 when he wrote this book, he is a true genius.

In the year 1973, Ziad was at the age of 17, He composed his first music for Fairuz. Assi his father was being hospitalized and Fairuz was destined to play the leading role in "Al Mahatta" by the Rahbany brothers, so Mansour wrote the lyrics of a song about Assi's absence for her to sing in the play and gave Ziad the task of composing its music. "Saalouni El Nass" became instantly a great hit. Everyone loved it and were amazed by Ziad's musical talent... Ziad appeared for the first time on stage in that same play "Al Mahatta" where he played the role of the detective. He also appeared later on in the Rahbany Brothers' Mays el Rim in the role of one of the policemen who ask Fairuz for her "first name, last name and Village".

In Bkennaya, a group of young people used to present new versions of the Rahbany brothers' plays, with Lebanese Madona the show singer in the role of Fairuz. In the year 1973, they contacted Ziad and told him that ,for once, they wished to do an original play, with an original script, new songs and a whole new story. Ziad agreed to take the job, and "Sahriyeh" was played on the "Bkennaya Theater". That play followed the Rahbany bros style. it was Ziad's first step into theater. The other plays that came after, were totally different. They treated political and realistic plots that touched people in their everyday life; So were his new songs...

The Love life and music of Ziad Rahbani

Ziad Rahbani married Dalal Karam, they had a son whom they named Assi junior. However their marriage failed and the couple got divorced; their relationship was not in the right direction. It started by Dalal writing about her life with Ziad in the gossip magazine Ashabaka. Ziad composed some songs about their relationship Marba el Dalal, and Bisaraha and few more.

Their separation, kept Ziad from seeing his son until he was nine years old. Each of them was living in a different part of Beirut during the war. Ziad lived in West Beirut and Dalal lived in the East side of Beirut.

After his separation, Ziad lived a well-publicized 15-year relationship with actress Carmen Lubbos. Their relationship ended after Carmen realized that Ziad wasn't able to offer her the stability she needed... In one of her rare interviews, in which she accepted to talk about her relationship with Ziad, Carmen maintained that Ziad, a controversial figure who has invited praise and criticism alike, was simply the man she once loved... she then added "never, during all the 15 years of being together 24 hours a day, did I regard Ziad in the light other people saw him in. To me he was the man I loved and lived with and drank coffee with every morning... And that is that.”

Ziad, from his side, said that Carmen had every right leaving him, since he spent the whole 15 years telling her that the state they were living in, the apartment, the chaos... was only temporary... That he was going to fix the whole situation, but he wasn't able to do it... That is why he thinks that not only Carmen would have done that, but any woman if she was in Lubbos' shoes... Still, and till that moment, one can easily notice that the majority of Ziad songs are related in a way to his relationship with Carmen... He openly said, that one particular song talked about someone he knows' life with a woman he loved and who lived with him for a long time, that song is "Walla3t kteer" from Salma Mosfi's record "Monodose"...

With Fairuz's separation from Assi, Ziad took over. Six albums till now were the fruit of this cooperation. "Wahdon" (1979) was the first album. In it Fairuz sang "El Bosta"... "What do you want? Give us the song and take 500 LBPs and get it over with!!!" these words were Assi's to his son when he first heard el Bosta written and composed by Ziad, to be sung by Joseph Sakr in the play "Bennesbe La Boukra Chou?"... "Maarefti Fik" (1987) was their second album, Kifak Inta (1991) the third, "Ila Assi" the reorchestration of Rahbany songs (1995) came fourth, followed by "Mich Kayen hayk Tkoun" (1999), "Beiteddine Concert 2001" (2001) and lately "Wala Kif" (2001)... Fairuz's experiment with Ziad has been a complete change... Her songs were from now on based on the poetic reality, not the poetic words... Ziad's poetry came from his catching the poetic moment in the images of reality and its stories... In other words, Ziad's "poem", natural as it is, has shown more of Nuhad Haddad's personality in the image of Fairuz...


Other works of Ziad Rahbany
The work of Ziad El Rahbany was not restricted to his mother Fayrouz. Before during and after the war, Ziad released and co-released few music and song records like: "Bi hal shakel", "Abou Ali", 'Halleluja", "Shareet Ghayr Houdoudi", "Houdou Nesbi", "Ana Mouch Kafer", "Hakaya al Atfal" "Bema Enno", and lately "Monodose".

He performed in concerts including; the Oriental Jazz Concert at the L.A.U. Lebanese American University (previously known as BUC - Beirut University College) Irwin Hall, the Las Salinas Concert, the Forum de Beirut Concert, the Picadelli Concert, and at the Mniha Concert in the Mont La Salle Ain Saadeh with his cousin, Ghassan Rahbany.

In addition to Ziad performed playing live in some pubs like the Medusa, Mon Général and Teatro.

Help us improve this page:   Correct or update the Ziad Rahbani page