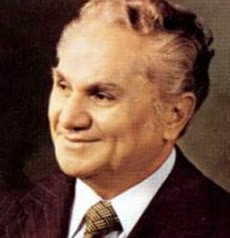 Zaki Nassif is one of the first generation of Lebanese composers. Zaki Nassif was born on the 14th of July 1918, he passed away on the 11th of March 2004 at the age of 86. Zaki Nassif accompanied the rise of Lebanon Radio (Radio Liban) in the early fourties. Nassif was and is still a force in Lebanese folk music.

Zaki Nassif is mostly remembered during the civil war for his anthem song Rajeh Yittammar Lebnan (Lebanon will be rebuilt).

The song has a special importance in the minds of Lebanese and arabs, especially that it was composed and sung at a time when violence and destruction were taking place in Lebanon.

Help us improve this page:   Correct or update the Zaki Nassif page