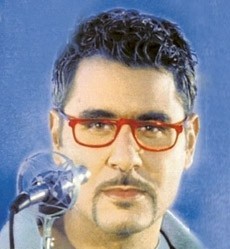 Yuri Mrakadi became popular in the year 2001, after releasing a hit song called Arabiyon Ana (I am an Arab). The dance track was very successful because it lifted the spirits of all those who were ashamed of their identity. Suddenly being an Arab was cool again!

Following the success of his first song, Yuri released another song with similar music and lyrics called Almara Al3arabiya, which was also popular all over the Arabic world.

Youri Mrakadi launched several albums among them is his debut Arabion Ana and his second Bahebak Mout, which included nine tracks.

Most of Yuri's songs stood the test of time and are still great even today. His beginnings were mostly marked by the collaboration with composer Hadi Sharara, currently the artist-manager of his wife Carol Saker, and the new talent Richii Abicair . The magical duo Yuri and Hadi went through a personal fight which lead to their professional split. Yuri did not recover well after that, and kept regressing until he completely disappeared.

Yuri is now focused on his advertising and marketing career. The last time we saw him, was in one of Crepaway billboard ads, an American fast food diner chain famous in Lebanon.

Help us improve this page:   Correct or update the Yuri Mrakadi page