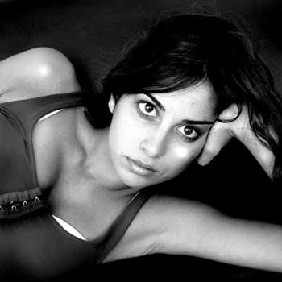 Yasmine Hamdan is a new generation Arabic electronic music singer who started in a group named Soap Kills along with Zeid Hamdan.

Yasmine Hamdan, sometimes searched as Yasmin or Yasmeen Hamdan was born in October 1976.

Soap Kills was an indie band which was formed in 1997 and based in Lebanon. Soap kills sometimes written Soapkills or Soap-kills, explored and mixed classical Arabic songs with electronic music. Soap Kills appears on several compilation CDs and later had their own work released under Bater and Cheftak,

Yasmine Hamdane performed in major locations around the world including Paris, Berlin, Melbourne, Beirut and Cairo.

The band even got mentioned in Time Magazine once.

Yasmine is one of the rare true female artists in the Music scene of the Arab World; she does not just put her voice on ready-made tracks, but also writes the lyrics, composes the melodies and experiments with different arrangements.

In the year 2009, Yasmine Hamdan collaborated with Mirwais Ahmadzai, a famous international music producer who made great works for artists like Madonna.

Yasmine with her intense sensual voice and Mirwais with his electronic French Touch produced a group called YAS or Y.A.S. (See YAS Mirwais Yasmine)
YAS was the first international Electro project to place the Arabic language at the centre of pop culture, the group released its first album entitled ARABOLOGY.

Yasmine Hamdan then collaborated with CocoRosie, before finally releasing her debut solo album "Ya Nass", written and produced in collaboration with Marc Collin (Nouvelle Vague) in 2012-2013. In it, Yasmine sings in different Arabic dialects, which alternate between Lebanese, Kuwaiti, Palestinian, Egyptian and Bedouin, and use a lot of the code-switching and references typical to Middle-Eastern humour.

Alongside Marc Collin's keyboards & programming, the album also features guitar work by Kevin Seddiki (who co-wrote three of the songs), and by former CocoRosie collaborator Gaël Rakotondrabe, who arranged and produced the song Enta Fen, Again.

Yasmine shot 3 videos from the album, a dreamy surreal clip for "Samar", a nostalgic visual for Beirut, and later on a dark and sexy video for "Deny" (in which she doesn't appear at all).

Yasmine appeared as herself, performing live on stage, towards the end of the vampire movie "Only Lovers Left Alive" directed by Jim Jarmusch. That led to her also performing in Paris, New York, London, Cologne and Berlin, as part of a marketing launch for the movie, organized by the producers. Other bands included Squrl, White Hills, Joseph Van Wissem, and Zola Jesus. Her song "Hal" was released as a video clip, directed by Jim himself. She was also nominated for the Oscars in the original feature film music category 2014.

Yasmine is currently working on her new album with Howe Gelb of Giant Sand, Steve Shelley of Sonic Youth and the French Villeneuve .

Help us improve this page:   Correct or update the Yasmine Hamdan page