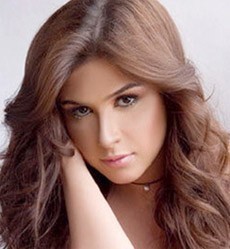 Yasmin Abdel Aziz is widely acclaimed egyptian actress and one of the most beautiful women in the arab world.

Yasmin Abdel Aziz has appeared in a number of egyptian movies since the mid 2000.

Haha Wa Tofaha, is one of the movies in which Yasmine played a major role, the movie got a lot of criticism since its launch.

Yasmin said that the movie is a social comedy and carries an art value which people are not seeing. She also added that it is perfectly fine to use some words and phrases which we use in public in our daily life.

Help us improve this page:   Correct or update the Yasmin Abdel Aziz page