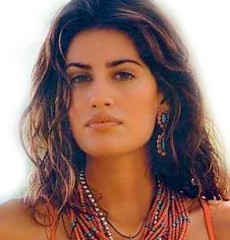 Yamila Diaz-Rahi is a famous Lebanese Argentinean supermodel. She was born on the 9th of march 1976 in Argentina to an Argentinian father who was a doctor and to a Lebanese mother who worked as a nurse. Yamila was raised in Argentina, alongside her two sisters Maria and Yael.

Yamila’s modeling career was a complete coincidence! She was still a student majoring in economics in Buenos Aires, when she was spotted by a talent scout while on a trip in Uruguay. The Milan based modeling agency offered Yamila a photo session and later her very first contract. Yamila soon relocated to Milan and later on moved to settle in New York City.

In 1999, she was featured in the Sports Illustrated Swimsuit Issue, and made the cover in 2002, and again in 2006. She has also appeared on the covers of Harper's Bazaar, Marie Claire, Glamour, Elle, GQ men's magazine, Maxim, Shape and was the first Latina spokes-model for Cover Girl.She also often appears in the Victoria's Secret catalogs as well as print ads for bebe and Swish Jeans.

Help us improve this page:   Correct or update the Yamila Diaz Rahi page