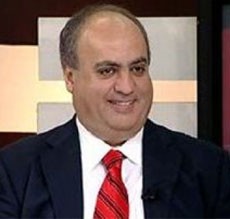 Wiam Wahab is a Lebanese politician, and a controversial Druze personality.

Wiam Wahab (Wiam Wahhab or Wi’am Wahab) was born in 1964. He was one of the earliest TV presenters in Lebanon to host live debates confronting two political guests, but preferred a career in politics. Journalist and former political adviser to Lebanese Prince Talal Arslan (between 1991 and 2000) , Wahab ran unsuccessfully in the legislative elections of 1996 in the Chouf. Wiam Wahab was appointed Minister of Environment in of Omar Karami's government(October 2004).


Wiam Wahhab is part of the National Coalition that supports the resistance movement. He is often involved in various feuds and fights with the Alliance on March 14(the previous ruling majority).


Wiam Wahab is a very controversial personality in Lebanon, and rarely makes politically correct statements. This is why ratings place him at the top of the list of most watched politicians and speakers in Lebanon. He speaks his mind freely, and because of his passionate speech he sometimes slips or makes provocative controversial remarks.

In 2011, his official website was hacked by Islamic groups. This was in response to a statement he had made during a Talk show hosted by Shirley El Murr, in which he expressed his disgust from the oppressive Saudi regime, that forces its women to cover up in what he called 'trash bags'. In a press conference the following day, he expressed his apologies if he was misunderstood or offended conservative Muslim women. He added his mother wore the hijab up to her death, and that the courageous southern Lebanese women also wore it, so it would not make sense for him to attack the scarf. He was trying to explain his anger towards women oppression in KSA, and expressed it in a wrong way.

He was also not very diplomatic when previously expressing his opposition to the special tribunal investigating the assassination of late PM Rafic Hariri. Although many Lebanese now know he was right in his position, at the time short sighted people were shocked by his strong remarks, equating the Tribunal with the 'sole of his shoe'.

Wiam Wahab clearly takes pleasure talking on TV shows. Because of his close ties with Syria, he also has a lot of classified information, including about many of the leaders in 14 March Alliance. Most of them were known pro-Syrian spies before switching sides, and this is why Wahab is feared by them. Wiam often uses popular or slang expressions to communicate with his viewers, and this is an additional reason why he often gets misunderstood or caught up in controversial situations.

Help us improve this page:   Correct or update the Wiam Wahab page