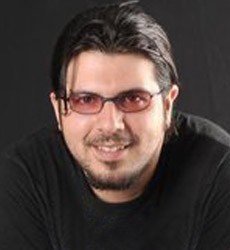 Walid Al Massih's style is mostly electo-pop Arabic New Wave Music, and has worked with many artists including his wife Maya Nehmeh (with whom he sometimes does duo songs, refer to Maya Nehme Michta2 Interview), Ragheb Alameh for whom he did “Yighib” as a first collaboration, Fouad Fares (Drunk), Belime, UTN1 and Star Academy’s Myriam Atallah ("Aman").

Walid is working on his debut self-titled solo album.

Walid Georges Al Massih was born on June 7th, 1982 in Anfeh north of Lebanon. As a teenager he played in a live music band in clubs with his brothers Jihad and Wissam Al Massih. Their music got the attention of Ragheb, and this is how Walid's career was launched.

Help us improve this page:   Correct or update the Walid Al Massih page